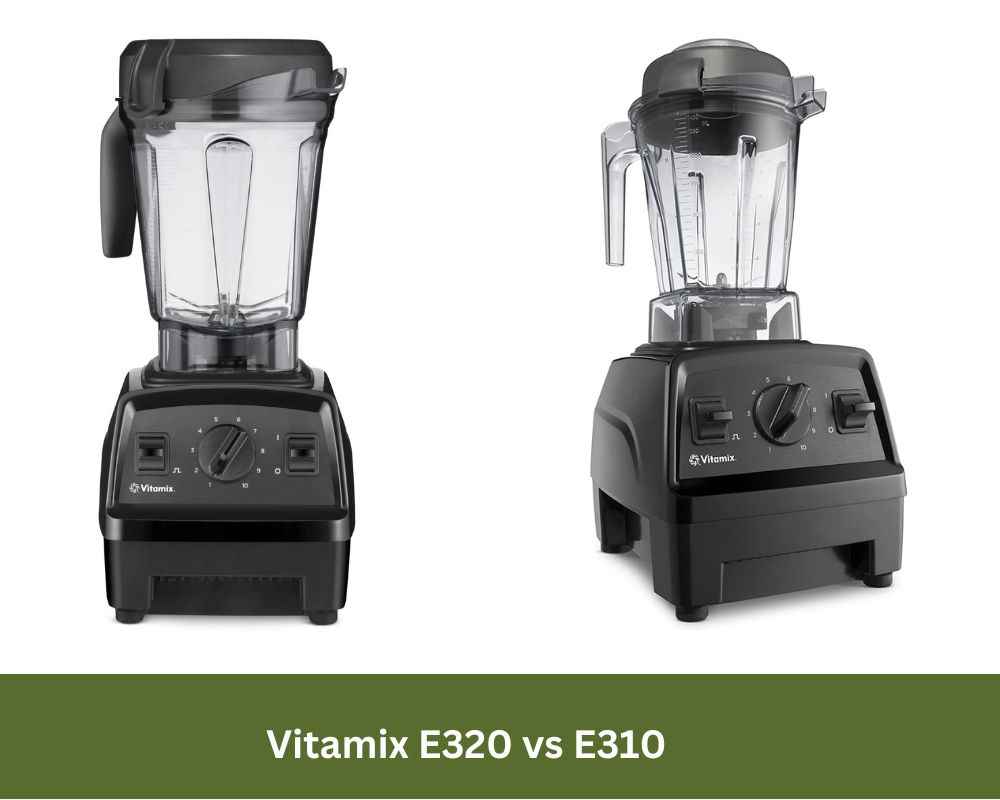 Vitamix blender rules the kitchen cabinet. Amongst all the variations Vitamix brought till now, Vitamix E320 and E310 are the most popular models.

The battle of Vitamix E320 vs E310 has been a common issue among every cook and chef. Both the blender model works like a charm and is pretty handy.

Despite their model types are similar, but they do carry major differences. For which, I have decided to unveil the differences of these blender models.

Vitamix E320 model has stolen every chef’s heart. The only impressive thing that this model provides is the motor.

The power of the motor is strong enough to blend anything solid or hard to break. This blender is for the families who has many family members in their household.

Vitamix E320 Blender model has a wide base for which it is easy to blend in many things. Along with that, the powerful motor is the prominent feature of the blender which no one can resist.

It also has stainless steel blades that can chop off any hard food substance into powder base. Now I have collected some pros and cons of Vitamix E320 Blender:

Vitamix E310 is one of the favorite models of mine. This blender is small in size and is pretty much durable.

The different speed variations and the sharp stainless-steel blades are the crucial reason why everyone prefers this model.

Vitamix E310 Blender can chop off anything that goes inside the blender. This can blend, grind, chop and make any food items like juices or guacamole.

Either way, the consistency that comes is to die for. Even if the power is less than E320, but still gives the best texture.

The pros and cons that I have collected are as follows:

Vitamix has brought two most amazing and mind-boggling blender models that can capture the attention of any user.

Let that user be a restaurant chef or a home cook, they will choose both the blender. Even If the user is a seasonal cook like me, Vitamix E320 and E310 are the best option.

For better understanding of both the blenders, I have created a comparison chart that will come in handy.

This are some of the parameters that I have collected and compared. According to me, I feel like the model E320 is far better than E310. Despite the opinionated fact that both has the same feature, but the containers played the game.

In depth Discussion of the Differences: Vitamix E320 vs E310

Now here is the thing. Both Vitamix E320 and E310 has similar features and similar working abilities. These two models play their own roles and games for which the models are still everyone’s personal favorite.

Despite the similarities, they have crucial differences that gives this blender models a different identification. I have analyzed and collected all the key information that the blender models contain. These differences therefore will help the users to understand which one is better.

As of the performance, Vitamix E320 and E310 is absolutely similar, more like they are 90% similar in performance.

This eventually states that the performance of E310 is slightly less convenient than E320. Although the consistency of the meals is quite similar, but if I consider the time factor, E310 is quite behind E320.

The power of Vitamix E320 is much efficient than E310. Because of the 2.2 horsepower and the sharp and dynamite stainless-steel blades, E320 is everyone’s first choice.

If a blender cannot process food properly because it has less power, then the blender is a waste.

E310 is a great choice for making purees or salsas for a really small friendly party. On the other hand, E320 is supreme for any sort of meal making process.

The best part is that I can even make a bread dough in this blender using the lowest speed.

Both the blender models are extremely stylish and has a sleek outer look. As for the size, I feel like both the models are slightly similar.

Approximately, E310 is a foot shorter than E320. However, their base is quite similar, just like a classic and regular blender.

Even their blender design is as similar as those classic designs, just their speed dials are different than others.

Let me start with the construction of E320. Starting with the container, it has the ability to carry 64 ounces of meal.

On the other hand, E310 model can only carry 48 ounces because of the container being smaller than E320. Nevertheless, both containers have the similar looking base.

Even the materials that was used for both E320 and E310 are same. They are made from BPA free Tritan polyester material which is the core reason for their premium look.

Also, I noticed that they provided a measurement-marks for appropriate measuring.

There is actually nothing to compare in between E320 and E310 since both has the same controls. Both has the option of ten different speed dial, from low to high.

Even the highest feature on both the blenders are capable of making warm food items without any hassle.

Also, both of them has a pulse feature and an off and on switch button that looks exactly similar. Yet the only difference I noticed is that the E310 buttons are slightly smaller than E320.

Vitamix has successfully managed to manufacture some of the noisiest blender models. That can partially ruin anyone’s hearing abilities.

E320 and E310 is the loudest and noisiest blenders they have. Their noise can reach up to 90 dB which is practically harmful for the ears if heard from nearby.

But to compare the noise levels, E320 is considered the ultimate noise maker.

Having a strong performance and horsepower, the noise can destroy people’s sleep in just seconds. But E310 does not go soft either, since the power and the noise level can hypothetically be someone’s nightmare.

The best feature that Vitamix has manufactured in any blender model is the cooling system. Both the blender models consist of a cooling fan that needs to be operated properly. The thermal sensor, which is the main reason for cooling detection, is the sole reason I bought it.

The thermal sensor detects the overheat of the blenders and then it accesses the fan to cool it down. Moreover, the sensor automatically stops the blender from working so that the fan can reduce the overheat.

It helps to chop off anything, fruits and veggies, within seconds. This feature helps me a lot because I can cook for myself rapidly and have to worry less about the chopping part.

Nevertheless, the horsepower plays the game here and it decides the performance ability of the feature.

Despite having a pulse feature in E310, it still works less efficient than E320. However, the feature is useful enough to make anything under seconds.

E310, for cleaning in the dishwasher, is the worst decision anyone can ever made. Although the material used to build the blender is a ditto to E320, but the container is not dishwasher safe.

But I can use the old soap and water technique to clean the inside and out of the container.

E320, nonetheless, is safe to throw it in a dishwasher. But, to be free from any germs or bacteria, the soap and water technique will always be on the top spot.

This will ensure a better cleaning and also better washing than putting it in a dishwasher.

Both the blender models carry a 4-inch sharp stainless-steel blade. Those blades can chop, grind, blend anything that comes around them. The tips of Vitamix E320 and E310 gives the models a reason that people blindly buy the product.

Because of those sharp and sleek stainless-steel prongs, the blending comes with a smooth-like texture. But the only drawback is that the blades are stuck to the blender, or in short, in-built. So, even if the blades don’t work, I have no option to change it.

There is no extraordinary additional feature that blew my mind, or could blow anyone’s mind. The only extra feature both Vitamix E320 and E310 blender models have is the tamper. The tampers help the bottom ingredients to get blend without getting wasted.

These are the in-depth discussion of Vitamix E320 and Vitamix E310 blender models. Although there was not that much of differences I found in both blenders. The reason being state is that the models are just from the same generations.

Since they belong to the same generation, they have a lot of similarities that cannot be neglected.

If I have to choose the winner, Vitamix E320 rules my heart. This blender model has all the features that are to die for.

I can feed a bigger family, grind a bigger batch, and also it has a better performance. The only thing that is against my will is the price range of this model.

Vitamix E310 blender can only have the ability to feed a single or at best, two people.

Hence, if I have to recommend which one to buy, I would definitely choose and also recommend Vitamix E320 blender model.

Is the Vitamix e310 suitable for family use?

I would say it entirely depends on the family members and the family appetite. Some family members might not eat a lot, so they can easily use this blender and work with it. Since the container of the blender is 48 ounces, feeding the family would not be a great deal.

Can you use Vitamix e320 for making smoothies?

The answer is, most certainly yes. Not only smoothies, Vitamix E320 blender can be used in making any dishes in general, like soup, juice, or smoothies. In addition, the smoothie blended in E320 blender will come out with a smooth texture. Which means there will be zero chunks available.

How does the cooling feature benefit Vitamix blenders?

It is a no brainer, Vitamix E310 is the entry level blender. This one is perfect for those newbie cooks who has never entered the kitchen. They can use this blender to cook for fewer people. However, E320 blender is for those who knows how to cook, so they can handle the power better.

Can you make hot soup in Vitamix e310?

Yes, making hot soup is possible in Vitamix E310 model. Although the container capacity is less and the horsepower is 2.0, it can still keep the soup hot. It is simply the highest blending power can enable the meal to become hot.

Vitamix blenders are the most common and popular blenders of all times. Both the blender models of Vitamix are my personal favorites.

Vitamix E310 is for those people who stays alone and has to take care of themselves. This blender model will blend or chop the portion of a single person.

Vitamix E320, on the contrary, is pretty useful for those who have a bigger family. This model has the ability to feed more than five family members without any issue.

Nevertheless, both the blender models are the winner on their spots regardless of their minor differences.