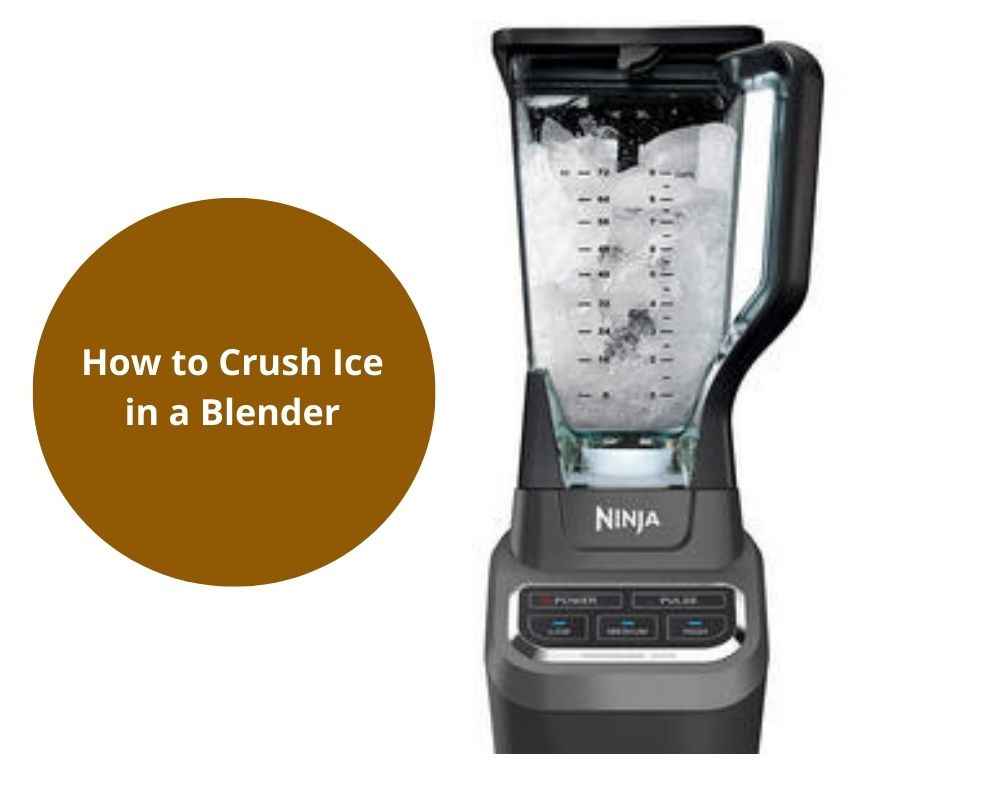 Smoothies or cocktails become complete by adding the essential ingredients to them. Adding crushed ice to the cocktail is one of the quickest and easiest ways to dress up the drink you are about to serve your guest. At the same time, it will provide a semi-sophisticated touch, if not sophisticated, to that cocktail.

But to do so, you need to crush ice properly before adding it to the drink. You can’t just put ice cubes into the blender and turn the switch on because it can damage the rotors and engines. As it is a little trickier than you think, learning the correct method of how to crush ice in a blender is way vital.

As we have mentioned earlier, putting a bunch of ice cubes randomly into the blender for crushing won’t be a good idea. There are some facts and cautions that you need to maintain before crushing the ice cubes. Those must remember facts are:

This easy-looking tricky task will become accessible in reality as well if you maintain the facts mentioned above. The next task for you is to follow the procedure and maintain the steps one after another. You will have to complete the task by following the steps below:

Step-1: Take Out Ice from the Fridge and Select the Small Cubes

At first, you need to take out the ice cubes kept in the ice tray from your fridge. The next task for you is to let those cubes rest at normal room temperature. Leave the tray for three to five minutes, and make sure the ice cubes don’t meltdown before you put them into the blender.

During that time, find the comparatively larger ice cubes and put them in a different pot to keep only the smaller cubes in the tray.

In the meantime, you need to check your blender by reading the manual provided with it. Unfortunately, if the blender doesn’t have enough horsepower, it will just spin the ice cubes around. If that’s the case, you will either have to purchase a capable blender or crush the ice manually.

The motor of the blender needs to have at least 400W of power to crush the ice cubes to prepare the drink.

Step-3: Put the Ice Cubes into the Container of the Blender

After you are done checking the blender and selecting the ice cubes, it is time to move on to the next phase. You need to take the ice tray and put the chosen ice cubes into the blender container in this step. But never fill the container entirely with the cubes, as it won’t help your cause, instead of making it more difficult.

That’s why you need to fill the container to 75% of its capacity and keep the rest part blank. It is essential to provide enough room for the ice cubes to move around the container while being crushed. Moreover, it will make the task of the blades easier compared to the situation when you fully pack the container with ice.

When you are done with the steps above, you need to start crushing the ice cubes that you have put in the container. Then you will have to press the pulse button of your blender after closing its lid. Again, it will be better for you to do it around three to five minutes in sudden, two-second intervals for about ten times.

Ice cubes can get stuck with each other during the process, and you need to prevent that. Try adding some water or juice into the ice cube container, which will also speed up the crushing process. While the process is ongoing, make sure that the motor is not struggling anymore to deal with the cubes.

When you are sure about that, turn the knob to medium speed, and keep it like that for at least ten seconds. During those ten seconds, there will be a heavy spin of the ice cubes, which has the biggest impact on crushing the ice. Then you will have to turn the switch of the blender off and take off the lid of the container as well.

Check whether the cubes are properly crushed or not to use in the drinks that you are preparing. If you are not satisfied with the result, then repeat the crushing process once again to get your desired result.

Step-5: Turn the Blender Off and Use the Crushed Ice

Turn the blender switch off and disconnect the electrical cord when you have achieved your desired result. Take the blender container out from there, and pour the crushed ice into another container. If you want to use that crushed ice instantly in the drinks you are preparing, you are all set to do so.

You can also preserve the crushed ice for further usage by putting the container into the freezer.

So, by following the above steps you will be able to crush ice in an effective way.

As we said earlier, you just need to have a blender with enough horsepower like Ninja BL770 Mega Kitchen System 1500 W to crush ice as per your satisfaction.

FAQs About How to Crush Ice in a Blender

Which size of ice cubes should I use to crush them in my blender?

The size of the ice cubes has a crucial role when you are about to crush them by using your blender. You should use the smaller ice cubes but not the smallest ones, as the bigger ones are tough to handle for the blades. At the same time, even if the blades are capable, larger ice cubes take more time to get crushed.

That’s why you should select the smaller ice cubes to crush them in the blender for further usage in drinks or cocktails.

Will the plastic container of my blender be able to deal with the blending pressure of the ice cubes?

If the container of your blender is made of plastic, then the crushing task will be difficult. The plastic containers, in most cases, are unable to deal with the spinning pressure of the hard ice cubes. As a result, even the container can break, which is never expected under any circumstances.

That’s why you should use certified glass container blenders to crush ice cubes.

For some drinks, adding ice cubes just add a more sophisticated look along with achieving fine consistency. At the same time, for smoothies and cocktails, it is like mandatory to add crushed ice. The best way of crushing the ice is to use a proper and powerful enough blender instead of doing it manually.

But whatever the scenario is, the process of how to crush ice in a blender is not as easier as it may sound. However, it is an art that you will learn after practicing it for few times if you have the right blender.