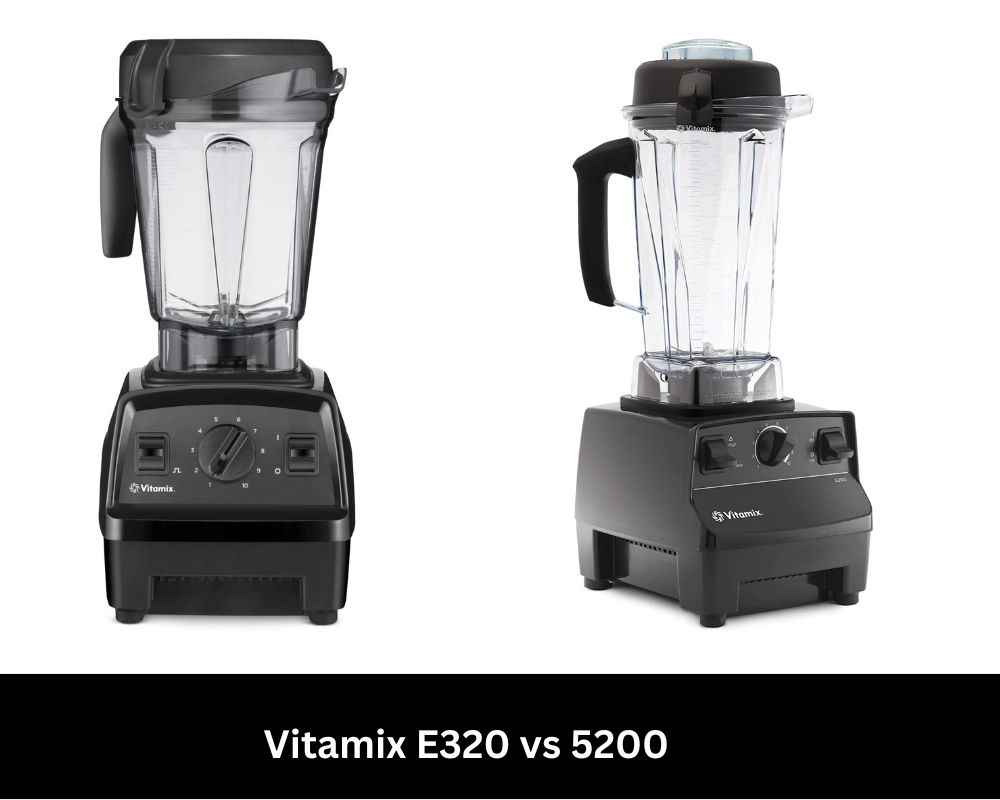 Amongst several Vitamix models or variations, the top two models that I prefer the most to compare is Vitamix E320 vs 5200 Both the blender models have the potential to last longer and work better without disturbance or issues.

Vitamix brand is every chef and home cook’s favorite blender. Being extremely operational and highly resourceful, individuals can blindly rely on their blenders anytime. Having different varieties, specifications, and models of blenders, undoubtedly Vitamix beats all the other brands.

At times, the kitchen space of the apartments I rent or stay for a while are low in space. Putting all the kitchen appliances becomes a hassle eventually. Which is why I prefer Vitamix E320 blender, as it light and also convenient to use.

This model is also known as one of the most “under the budget” blender. The reason is simply because the price is reasonable comparing to the features it provides.

Let me show the pros and cons of Vitamix E320 blender:

Another favourite blender of mine is Vitamix 5200. This blender works as a showpiece that you want to keep in the kitchen counter all the time. Mainly, individuals with a king size kitchen can buy this blender since the model is slightly huge to store.

Despite being massive in size and the height is outsized, this blender can grind anything into pieces! Now, let me show the pros and cons of Vitamix 5200 blender:

To make things simpler and easier, I made a comparison chart that shows the key differences between Vitamix E320 and Vitamix 5200. I have listed down all the tasks and features that each of them provides and the lacking they have.

Now to compare the chart of Vitamix E320 and 5200, it is safe to say that both the blenders are quite similar. Let that be the outer materials, blade numbers and materials, capacity, or cleaning method. Both the models ace in their own jobs and works like wonders.

But to compare them, I can see a few unique function or features that lacks in one of the models. This lacking is particularly the reason for which I opt out of it.

In-depth Discussion of the Differences: Vitamix E320 vs 5200

In case of performance, I noticed that Vitamix 5200 performs better in grinding small food chunks than E320. Moreover, I don’t have to pour too much of water to blend the food. This simply means the 5200 blenders can blend in small batches with no pressure.

On the other hand, E320 blenders can chop off bigger food chunk because of a wide base of the blender. Thus, this works as a better food processor than 5200 because of the base.

Considering the power of both the blenders, I can safely say that Vitamix E320 wins the game. With a horsepower of 2.2, this blender can chop off anything within seconds. Along with that, the wide base and larger blades made it easier to prepare the food in less than required minutes.

However, 5200 model with 2 horsepower still works perfectly fine, if not better than E320. The blades are smaller than E320 because of the base for which the food might come out a bit liquidly. But both the blenders are suitable for making juices or smoothies.

This will be a really long and debatable topic to discuss. For me, both the blender has a slight similar look that might question my choice. Both E320 and 5200 blenders have similar interface and also the base motor is exactly same.

Furthermore, both blenders have same manual buttons and switches.

Now comes the actual design specifications. The dial bar that Vitamix 5200 have is smaller in terms of size. It is also made of rubber for which it got a slimy texture when I touch it. But on E320 blender, it has an additional pulse feature which 5200 model lacks.

Along with that, E320 model is slightly smaller than 5200 since the container is 3-4 inches shorter than 5200. As for the kitchen aesthetics, E320 model only has 2 colors available, but 5200 has 3 different colors.

The container of Vitamix E320 blender is made up of Tritan or in broader term, BPA free Tritan. That simply states an impact resistance co-polyester. Mainly, the blender container cannot go wrong unless it is roughly used.

Both the blender models have similar controls like buttons and speed meters, but here’s the thing. E320 has an extra button known as ‘pulse’ which is unavailable at 5200. But, what E320 lacks is the switch labelled as ‘high’ and ‘variable’ which comes in pretty handy.

Noise level is like a major drawback for Vitamix E320 and 5200. Despite the higher performance, the 2.2 horsepower generally creates more noise. Since the grinding and chopping is at a phenomenal mode, the noise level is bound to get increased.

Nevertheless, the only advantage of having a 2-horsepower blender is that the sound is less comparing to E320.

I saw that both the blender models have the capability to cool itself down when overheated. But 5200 model is quite an advance model. It includes a sensor and a safety fan that ensures the blender to cool down when heated.

Here is the thing. Vitamix E320 wins the game according to me, since the cleaning feature is super simple. I just have to pour soapy water inside the container and hold the button until the whole thing it cleaned.

However, I have to manually dismantle the blades from the 5200 blender and clean them up. This particular task is time consuming and tiring at the same time. But both can be put inside the dishwasher to clean the inside and out.

Considering the blade materials and the tips of the blades, both the blender models have stainless steel blades. However, the size of the blade plays a big role in both the models.

Vitamix E320 has larger and sharper blades since the base is wide to crumble many solid foods. Moreover, the blade provides a hot friction, which allows to make hot soups whenever you want.

Vitamix 5200 has smaller blades and tips on the other hand. Since the base is narrow, the blades are smaller in size as well. The best part about the blades is that it can grain any solid food into powder within a jiffy.

Talking about additional features, I can say that both the blender model comes with a tamper. The tamper simply helps the ingredients like leaves which might stay at the bottom to blend properly.

Other than that, there are not any additional feature/s that elevates any of the models.

This are the differences that I saw in Vitamix E320 and 5200. At some points, both blenders have similar concepts with one or two unique functions. But eventually both serves the same purpose, blending and grinding meals.

Let that be solid food chunks or anything light and watery, both the models will blend them thoroughly.

For me, Vitamix E320 wins the game. First and foremost, this blender model is straight up a bargain. Unlike 5200, this blender works wonders despite being on the cheaper side. Not that 5200 model has issues, but from the budget perspective, E320 wins.

Furthermore, it has an additional feature called pulse feature which blends and grinds anything properly. If Vitamix 5200 had that feature, I would have gone for that model, but sadly they don’t have that feature.

Vitamix E320 is also small in size, so it is a portable blender. This model is easy to shove under any available corners of the kitchen without any worries. Vitamix 5200, on the other hand, is quite big to even store it at a cabinet.

Overall, I will suggest everyone to go for Vitamix E320 blender since it has amazing features.

Vitamix 5200 is a 1380 watts blender. Maybe because of the horsepower and incapability to hold in many foods at once. Since the base is small, despite being larger than E320, it needs less power to blend.

In addition, it lacks an extra feature, which is pulse, for which the wattage is lower than E320.

How many watts is the Vitamix E320?

E320 model of Vitamix has a wattage of 1580 which is really high comparing to 5200 model. The main reason I can see is because of the 2.2 horsepower and the additional pulse feature.

Along with those features, they have 10 different speed modes plus a pulse mode. This are practically the reason this model has higher wattage.

Can you prepare hot soup in Vitamix E320?

The hot friction that the blade creates helps to prepare hot soup within more or less 5 to 6 minutes. Although, the ingredients used in the soup plays a role in deciding the time or duration.

All I need to add is just a required amount of broth and dry ingredients, that’s it! The friction will ensure that the soup stays warm for a long time, and smash all the chunk pieces that soup contains.

It is possible to heat up soup with Vitamix 5200 if I tend to ignore the hot friction part that E320 have. If I blend the ingredients and the broth at the highest speed possible, then it will heat up the soup.

However, I assume that the soup will have more of a warm temperature more than hot temperature.

But from the look perspective, 5200 has more color variety than E320 which is sad. Also, E320 has additional buttons and features that elevates them. Even the portability of E320 model makes them stand out.

Overall, both the blender models, Vitamix E320 vs 5200, caught my attention since they work like a charm. But, if favouritism is not considered as an issue, E320 blender model is the one for me. Although my kitchen aesthetics would mind the choice, but it is really portable and durable.

But, if I ever get a king size kitchen for myself, then I will definitely choose Vitamix 5200 model any day. It has three different colors and can make smoothies with no negligible or noticeable chunks on it.

But, Vitamix E320, I believe, is a versatile and durable product that matches all the requirements a blender should have.